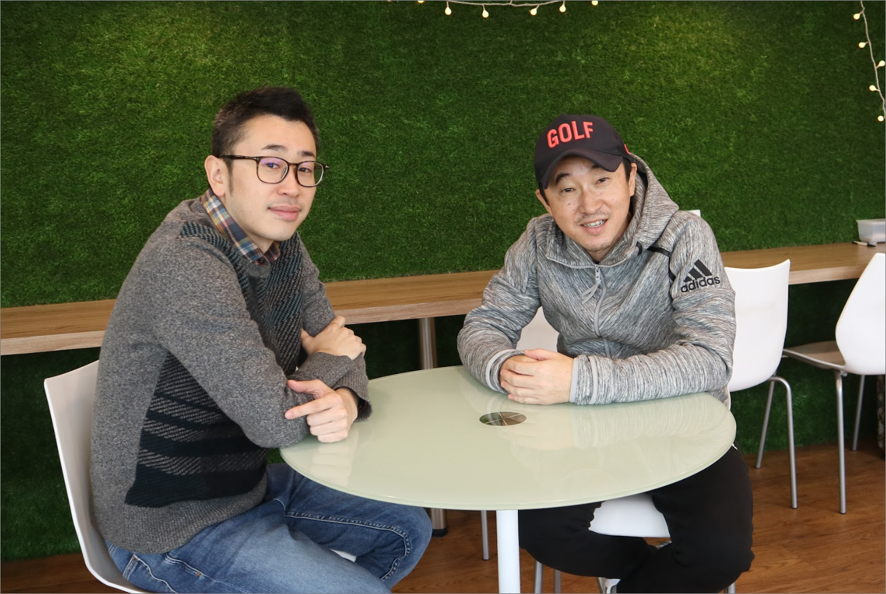 ―First of all, how did you know each other?

Fujiwara: It was around 2010 when we met for the first time at a study session for mail-order sales hosted by FINDSTAR HQ. So it's been 10 years now.
Hamamoto: At that time, I just established Hakkou Seikatsu in May and had no knowledge or know-how of direct marketing! I participated in various seminars and study sessions in order to learn everything.
Fujiwara: I held a paid seminar once, but it was the only time you didn't come (laughs).
Hamamoto: I wonder if that happened (laughs). I didn't have money at that time.

Fujiwara: We met every month at the study session, and then you went to Singapore in 2012.
Nowadays, the number of people and companies going abroad has increased, but there were still few around me, so I thought it was amazing.
But I'd never thought about "global" at that time.


―Then, when did you become aware of foreign countries?

Fujiwara: In my case, I didn't have the motivation to go global from the beginning. I just had a thought to make an entirely new thing someday.

I started thinking about that from around 2011, and around the fall of 2012, I asked Mr. Naito, the group representative of FINDSTAR HQ, "What do you think if I go global?"
He answered that it might be good, and that's why I decided to do that.
However, I hadn't decided in which country and what to do.
From November to December that winter, I wondered almost all the time.

―Then you had thought of Mr. Hamamoto.

Hamamoto: It was just when I was returning to Japan from Singapore on the New Year holidays. We talked while having lunch near Kanda Station.

―Why did you decide to go abroad, Mr. Hamamoto?

Hamamoto: In the first place, the target was Asia and other countries when I founded Hakkou Seikatsu.
Companies in Kyusyu were strong in the field of single-item mail-order.
As I saw that the benchmarking company had grown from JPY 2 billion to 20 billion, about 10 times over the last 10 years, I thought that the mail-order market was in the maturity stage in Japan.
That's why I was mainly targeting Asia and others from the beginning instead of Japan, which was a latecomer.

Hamamoto: I also think that's because I formerly worked at a trading company.
At that time, I was forced to make business plans one after another, and there were more global projects than domestic ones.
It seems that the experience and thoughts in that period have come to life now.

―Why did you choose Singapore as your first country?

Hamamoto: Singapore, Hong Kong, and the United Kingdom are the only countries where you, at an owner-affiliated company, can get a visa and live with your family.
I preferred Asian countries and English-speaking countries in consideration of my child's future, and finally decided to go to Singapore.
Anyway, I was thinking of developing Asia based in some country.

When I actually went to Singapore, there was no infrastructure in place or payment system.
So I had to create a system for mail-order from scratch. However, the local people didn't have the custom of purchasing via mail-order yet, so I had to sell to the Japanese people living in the area. To be honest, it felt like it was too early.

Fujiwara: I was saved by his positive thinking, like "try it anyway".
At that time, I'd never been to Taiwan and was wondering every day what kind of business I would do in Taiwan. He said to me, "You should live honestly with yourself." That word still remains in my heart.

―What kind of advice did you receive specifically?

Hamamoto: I was thinking neutrally rather than giving advice.
In the first place, it's difficult to start a new business in Japan, but it's even more difficult in other countries.
Under such circumstances, negative things and difficulties will come as much as possible. What will be the support at that time?
After all, it's about being honest with yourself and thinking about what you're passionate about.
During a really hard time, your heart will be easily broken without it.
That's why it's important to have something that you really like from the bottom of your heart.

Fujiwara: It's exactly the same as you talked to me while having lunch seven years ago (laughs).
Looking back, it was really good that I've been working on "global mail-order support".
In terms of risks and returns, the only risk I had was to go there. It was "global x mail-order support" that I could launch at a high speed with my sales and proposing capability as well as experience and know-how cultivated in FINDSTAR.

The final deciding factor came after I became honest with myself and thought about what I was passionate about.
That's why Mr. Hamamoto is my benefactor.

―Please tell us if there are any important points from a management perspective to succeed globally.

Hamamoto: From a management perspective, there are three major factors.
The first one is, as I said earlier, to find something that you really want to do.
Just trying an A/B testing like single-item mail-order, it doesn't work in other countries.
You need to have a passion to actually visit that country to do business seriously.

The second factor is that the top person or someone with the equivalent authority is living in or is always watching over that country. Global businesses are not so easy.

The last one is the speed of decision-making and taking action. You have to find an alternative immediately after failed and always be one step ahead of other people.

Fujiwara: His speed of decision-making and acting is overwhelming compared to other companies.
Decision-making, judgment, and action speed are the superiority and differentiation points of Hakkou Seikatsu.

Hamamoto: My company is a super-owner company, so I really hate wasting money and time.
I'm always wondering like, "Is it really meaningful to pay one million yen now?" As for time, I'm thinking about the effective use of time and the accumulation of such efforts as my time is directly linked to the sales and growth of the company.

As for decision-making, it's just I'm more sensitive to change than speed.
I'm not trying to do anything in a multi-faceted business. The products are summed to about three axes.
In my case (Hakkou Seikatsu), it works because there's no one to complain about my judgment. The decision ends in 0.3 seconds.

Fujiwara: I think his timing of expanding countries, increasing the number of products as well as the action speed are amazing. He makes a decision quickly, but based on a decisive blow among a series of signs.

Hamamoto: That's right. Even if there are signs, I usually decide after a certain grace period or giving a proper chance. The same applies to products and services, companies and people with whom I associate.

―What do you think is important for the field members to succeed globally?

Hamamoto: From a member's perspective, the important thing is simple: "Do your best for your assigned job without saying complaints" and "Achieve 100% or more results". What do you have to do to achieve a certain result? And what will you do?
Someone surely watches over your effort. Even if you get no result at that time, the process will benefit you. You can make proposals to the company or to yourself based on that resource.

Fujiwara: Certainly, in most cases, those who can produce results can do the same in any job.
Whether they're engaged in sales or in backyard tasks, they are somehow able to produce results.
Their actions and processes lead them to success. Furthermore, I think that it's necessary to take extra actions in order to succeed globally. 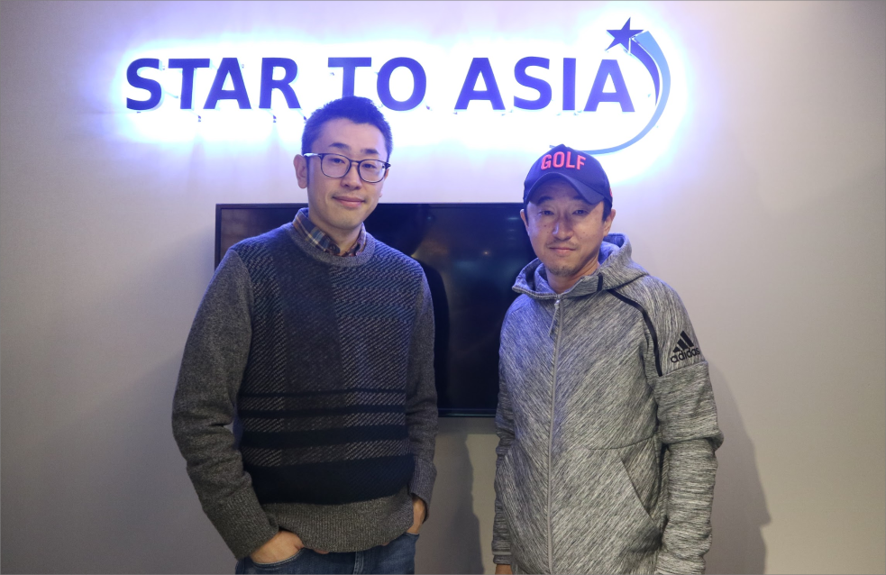 ―What do you think about each other?

Hamamoto: Mr. Fujiwara is my comrade to liven up this industry.
Fujiwara: For me, Mr. Hamamoto is a person who dares to say everything, including the bad points of STAR TO ASIA.
That's why I trust him very much. If he tells me something severe, I have to fix it right away.

―Hakkou Seikatsu is currently thinking to move its main base to Taiwan. Can you tell us the background and reason?

To think about how to develop it, the problem was ensuring human resources.
We're having difficulty in hiring people in Tokyo. It also costs to ensure human resources in Japan, so I thought about having a base in Singapore. However, it was very difficult in terms of both cost and management of human resources.

Hamamoto: When looking at the hiring cost, the practical ability of work, and the language, I found that there were many people who can speak Japanese in Taiwan. They are also familiar with Chinese characters. Those who worked at STAR TO ASIA were very nice, and I loved their personality.

It would be easy to reach excellent people and create an organization because of their good personalities. That's why I came to think of moving to Taiwan as a base for ensuring human resources to expand into entire Asia. The idea was what I got from traveling abroad.

―At last, what do you expect from the future STAR TO ASIA?

Hamamoto: After all, the most important thing is marketing expertise.
I want them to build a successful model in marketing not only in Taiwan but also in China and Southeast Asia.
I hope they'll lead with innovation and scale, aiming for even more breakthroughs.

Fujiwara: You are my benefactor, so I think I have to give back properly through the success of your company. I hope we'll do good business together.